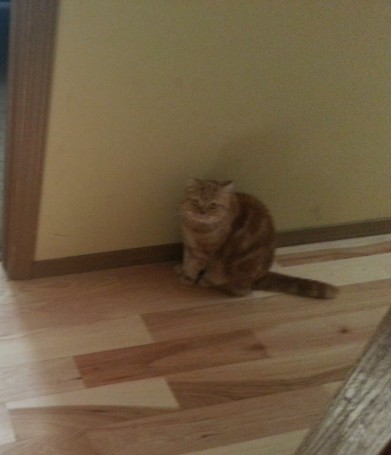 The picture above is my cat Bart.  He’s sweetheart but sometimes Bart can be a stubborn little guy.

Finally after a few minutes of this nonsense I stopped chasing after him and I shook my finger at him saying, “Bart, make up your mind!  I’m not going to beg you to let me pick you up. You’re the one who came crying to me but if your going to keep running away then don’t keep coming in here meowing at me every 15 minutes!”

About 15 minutes later he came back meowing and this time I tried hard to ignore him.

The more I ignored him the more louder he meowed.  Soon he began walking around my legs so that I could not walk or even begin to ignore him.  Sighing I reached down and this time he finally let me pick him up. I cuddled him and and told him I did not understand why he felt he had to be so stubborn all the time.   I then kept hugging and petting him letting him know how much I loved him.  I never figured out what it was that Bart wanted other than my attention and I am still not sure why that cat is so finicky like that.  It was very obvious he needed me to pick him up from the first time he meowed at me and it made not a bit of sense why he was so stubborn about letting me do it.

Later I got to thinking about Bart and I realized that is exactly how I behave with God sometimes.

A few days ago I did something that I know was not very pleasing to God. The day after I did it I felt terrible about what I had done. I quickly went to God and I apologized but for some reason after I apologized I still kept him at bay most of day. On and off all day I would go toward him but then I would back off.  Each time I came to him it felt to me like he was telling me it was okay to come to him but I just could not seem to let him get very close to me.  Though he was always there each time, something I notice now is that he never begged me to come to him and he never chased me down, he just waited. .

Finally later that afternoon after spending most the day running away I went to him and instead of ignoring me he reached down right away and scooped me up.  He listened to what I had to say and then he did the best thing of all he wrapped his arms around me and he let me know he still loved me anyway.

The thing I realized the most in all this is that God had already forgiven me for what I had done the day before and I had wasted a whole day running away from him because I had not yet forgiven myself (like I thought I could run away from God?!).  Sometimes I think forgiving myself is a pretty hard thing to do .  Thankfully God does forgive me and he wants ME to forgive me too.  I just have to quit being so stubborn and stop running away from him and trust in his promises. I need to just Let him love me like I truly know he does.

Just like my Cat Bart is a stubborn little guy I will admit his owner is sometimes a little stubborn too.

Do you have something that you need to talk to God about today? Don’t waste precious time being stubborn like I did and running away from God.  Instead run toward him.  I promise he will be there waiting for you. He really wants to listen to you and he loves you very much.

Have a blessed day and thanks for reading, T

3 thoughts on “A Stubborn Little Guy”